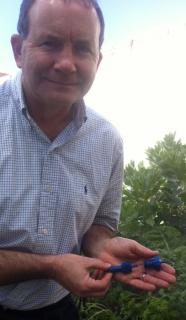 Victorian inventor Norm Ladson is about to launch an ingenious new click irrigation solution at this year's Water Week. The annual Water Week event is being held across Australia from 19th October to 25th October.

The retired plumber is already proving his irrigation solutions are in demand after national home hardware giant Bunnings agreed to stock his irrigation products.

Norm's new product focuses on a new form of click irrigation system in the form of a clever improvement of the old and cumbersome poly pipe and joiner system. Norm's new system endeavours to bring irrigation into the modern age with a 4-hose connector featuring female and male connectors that can click in with a 13mm, 6mm or 4mm option.

The new irrigation system not only updates a tired and clumsy system it provides users with the flexibility to turn on or turn off each line or alternatively run extra lines if required. The system allows users to run either a 13mm or 4mm click dripper hose or a 4mm click sprayer line all with the convenience off/on switch's.

The new innovation was developed after Norm discovered a hole in the irrigation market. The new click irrigation system has a completely unique design and functionality that users have never seen before.

After a successful career as a plumber, Norm certainly isn't slowing down and has a passion for innovative design concepts in the irrigation area. Norm takes a holistic approach to all his inventions, developing the idea from conception to fruition. Norm takes care of sales, product design, art work, photography, logistics, packing, marketing and accounts.

From his early days at Technical College studying four trades for four hours per week, Norm is proud to be continuously developing products and inventing new ways to revolutionise the irrigation industry in Australia.